Cindy’s eye ulcers appear to be an ongoing issue.  The day after I took this photograph (24th February 2011), Cindy was diagnosed with yet another eye ulcer – this time it was in her left eye.

The day had started off quite normal.  Both Cindy and Bella were their usual silly selves and there was certainly no evidence that there was anything wrong with Cindy.  I popped out during the afternoon to get some bits and when I got home, Cindy was in the hall, as per usual, howling to get into the garage.  I scritched her head as I always do in greeting and noted that she was hunched up under my hand.  I thought it was quite cute and assumed that she was simply enjoying having her head scratched.  She was so compact that I could not help but want to pick her up for a proper cuddle.

The temptation proved to be too much for me and I did try to pick her up.  However, she struggled against being held so I let go.  That’s when I noticed that something was up – instead of running all the way up the stairs and then howling at me as if to tell me off for trying to cuddle her, Cindy hopped up the next step and huddled into the corner with her back to me.  As I stroked her, she moved away from me again, hopping up to the next step and huddled into the corner again.

I climbed past Cindy and made out that I was ignoring her.  As I headed into the kitchen, I looked back to see what she would do.  Cindy followed me to the kitchen where in the bright light, I could see that her left eye was half closed.

I couldn’t have been out of the house for more than half an hour tops and I know for a fact that Cindy had been perfectly fine when I popped out.  The speed of her deterioration was alarming.  I promptly called Companion Care and was advised to bring her in immediately.

Now, as any cat owner will know, trying to catch one’s cat to put into a carrier for a visit to the vet is never easy!  In our case, if either cat gets under the bed in the spare bedroom or behind the sofa in the lounge, it is pretty much game over as there is no way we can get to them.  Catching Cindy would need tactical planning.

She KNEW she had to go to the vets, so as soon as she saw me approach her, Cindy ran straight upstairs and under our bed.  I quickly shut all the remaining doors upstairs with the exception of the bathroom and then ran downstairs and shut all the doors bar the kitchen.  I then went back upstairs and crawled under our bed to try and reach Cindy.  She bolted out of the bedroom and headed downstairs.  I hurriedly crawled out from under the bed and quickly shut the bedroom door behind me.

Cindy now had only 2 places to go – the bathroom and the kitchen.  Neither room offered her anywhere she could go to hide where I couldn’t get to her.  I felt so bad as I watched her stare at all the closed doors downstairs before rushing back upstairs only to stop short, when she saw all the closed doors bar the bathroom.  Cindy crept behind her tree but as I made to grab her, she bolted past me and ran downstairs to hide under the radiator in the kitchen.

I closed the kitchen door behind her before going downstairs to retrieve her carrier from the garage.  When Cindy saw me come back with the carrier, she knew she had lost.  As I opened up the door of the carrier, she walked towards me meowing her protestations.  She gave me a reproachful look before walking into her carrier.  There was no fight or struggle to get her in.  The little angel made it very easy for me and I loved her for it.

After an initial wail as I started up the car, Cindy settled down nicely.

This eye ulcer was the worst that Raj had ever seen Cindy suffer from.  It covered ¾ of the pupil and ran down into the ciliary body which was badly swollen.  He performed a Schirmer test on both eyes to make sure she wasn’t suffering form dry eye syndrome.  The results proved to be normal.  Next, he tested her for Feline Chlamydia.  While we waited for the results to come through, we discussed what could possibly be causing Cindy to have so many eye ulcers in such a short space of time where the problem would alternate between both eyes.

Since both Cindy and Bella do not go our per se, infection caught from another cat was immediately ruled out.  The girls have access to outside space via balconies on the first and second floor only, so grass seed getting into her eyes was also ruled out.    We discussed the possibility of the injury being caused by Bella when the girls fight – however, since there was no evidence of scratching on Cindy’s eyeball, this was also ruled out.

The test results for feline chlamydia came back negative.  The only other possibilities were something bacterial or a virus.  I gave Raj permission to take samples to be tested for Herpes and Celici and a swab for a bacterial culture.  Poor Cindy was not a happy girl at all but to be fair, I don’t think I would have been either if someone had been poking at my eyeball!

We went home with a tube of Fucithalmic, the same medication that we had been given last time and instructions to come back for a check-up on Wednesday morning.  We were to try and apply the drops 3 times a day but in reality, it was only ever going to be twice a day since David works and I can’t eyedrop Cindy on my own.

When we got home, Cindy walked out of the carrier, looked around her and  walked straight back into her carrier.  She remained in it for a good 2 hours or so.  I can only conclude that she felt vulnerable and the carrier offered some sort of security.

David and I religiously gave her the Fucithalmic for the next 5 days.  After only 2 days, Cindy was clearly feeling better as she became more vocal and demanding of attention.

This morning’s check-up went well.  All signs of the ulcer are now gone but Amy advised me to continue treatment for a further 2 days, by which time, the test results should have come back.

We also discussed whether there was anything in the house that could potentially be the problem – food, air freshners, cat toys… all were ruled out with the exception of the cat trees.  The ones we have are made of sisal and over the years, Bella and Cindy have pulled much of the sisal loose.  Amy commented that the loose sisal could be shedding fibres that were getting into Cindy’s eyes.  This is a possibility, but if this really was the case, why was Bella not affected?

I guess we will just have to wait for the test results before deciding on our next course of action…. 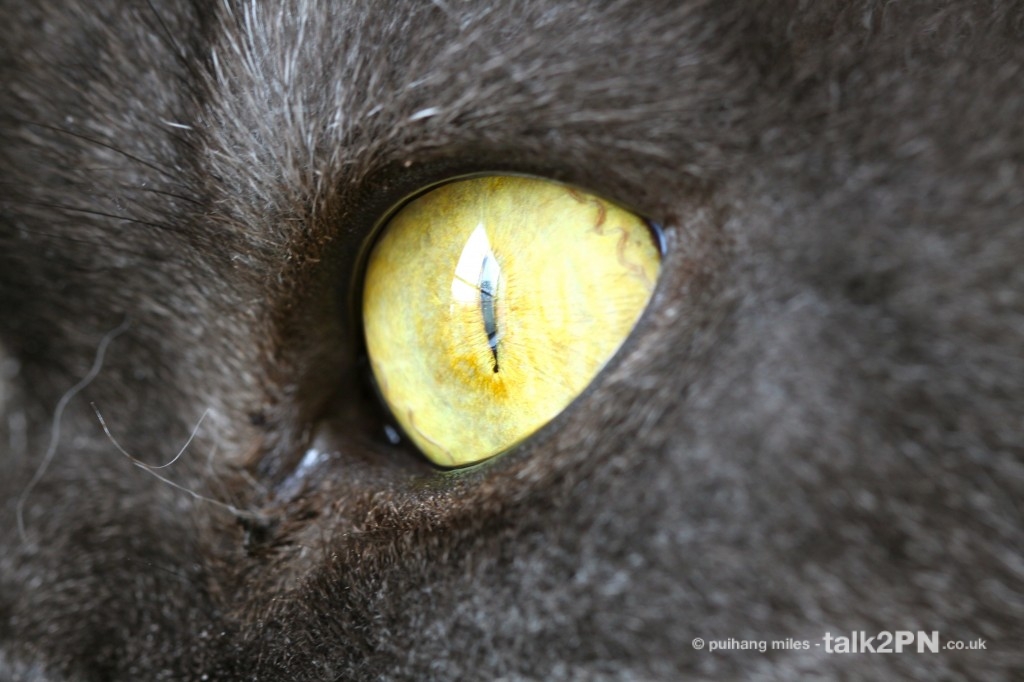 I received a phone call from Amy at Companion Care this morning with the remaining test results.  Herpes and Celici came back negative.  Attempts to grow a culture from the bacteria failed meaning it’s not a bacterial issue.  The only conclusion they can come to is that something in our house has changed OR the cause is Bella and Cindy fighting.  However, Raj had ruled out the cat fighting to be a cause.

In the event that Cindy has another eye ulcer, she will be referred to a feline eye specialist as our vets have now exhausted every test available to them.

For our part, I am going to start working my way through the house to try and work out what has changed in an attempt to try and help Cindy.  First things to get packed away are the Kickeroo toys.  Her eyes get very wet when she plays with them and their introduction to the house coincides close enough to the start of the recurring issue to make them a prime candidate.

A Tribute to Mittens

The Ospreys of Rothiemurchus