Le Parc des Felins is home to over 25 species and sub species of the 36 feline species in the world.  At over 60 hectares, the park which is located in the magnificent woodland estate of la Fortelle, is simply enormous.

The park comprises of 5 zones, with the 140 cats that live in very large natural enclosures divided up into the 4 continents from which they originate.  The fifth zone/continent is dedicated to the lemurs of Madagascar (well their latin name does contain the word “cat!”).

Whilst I had the opportunity to photograph every species in the park (and I did), I am only posting up my favourite images so not all species will be represented with an image.

Le Parc des Felins is home to both species of the Asian Golden Cat – grey green and red gold. These cats are normally very shy and this is the only time I have managed to successfully capture an image of them.

One of the huge attractions of the park is their large collection of White Tigers. These stunning creatures do not exist in the wild. Nor are they a species in their own right. The white coat is a result of in-breeding and their population has been carefully maintained for the last 60 years by man.

The Malayan tigers live in the largest tiger enclosure in the world at 3.5 hectares. They have the most stunning face – not as mad as that of the Sumatran but not as soft as those of the Bengal or Amur tiger.

Dinah, the year old snow leopard cub was a huge draw for the photographers and boy did she know it! She still acted and played like a cub, pouncing on her mother, playing with branches and rolling down the mound, providing everyone with some great photographic opportunities. 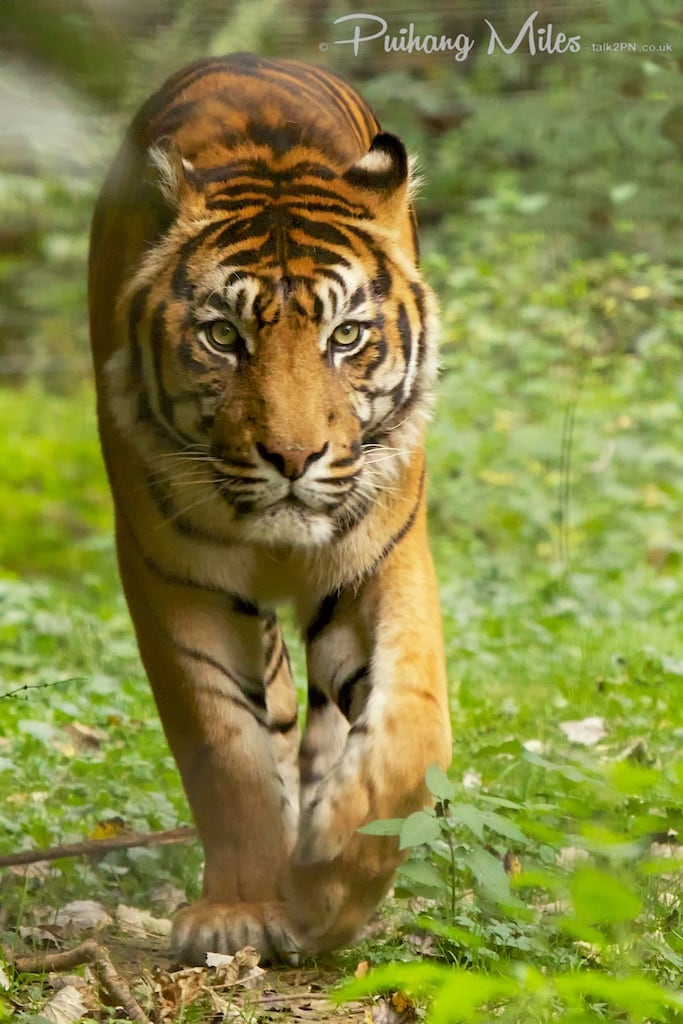 The Sumatran tiger is distinguishable from all other species of tiger by the fact that they have webbed feet and their beautiful faces have a slightly mad look.

One of the main reasons for visiting Parc des Felins was because another of the WHF Pallas Cat kittens had moved here – Pamir’s older sister, Ulan Bator. It’s been over a year since I last saw Ulan Bator and any ideas of easily identifying her were quickly dashed when I realised that there were two female Pallas Cats in the enclosure!

The park has 2 enormous Amur Tiger enclosures. One is home to a family of 4 and the other holds a second breeding pair. Natalya is the matriarch in the family group and was sadly, wild caught in Russia.

The Africa zone is home to two different species of lion, African and Angolan. I watched with much interest as one of the Angolan lionesses started a roaring match with the African lionesses before settling down to sleep once she had wound them up good and proper.

This adorable kitten is a Gordon’s Wildcat and one of a litter of two kittens. The timing of our visit turned out to be impeccable as the park was full of cubs and kittens.

The Persian Leopard enclosure is huge with tall trees thus allowing the leopards to hide out in the tree branches, just as they would in the wild.

Conscious that we still had one last zone to visit, we didn’t spend as much time in the African zone as I would have liked, but the jaguars in the American zone more than made up for this.

The breeding pair had had a litter of two the previous year and whilst they were technically no longer cubs, they were still cute and behaved more like cubs than sub adults.

The Puma enclosure is just lovely. It’s spacious with plenty of trees for the five Pumas to climb and chase each other in and made for some wonderful backdrops in which to photograph.

The female Geoffroy’s cat was very relaxed, unlike her mate who paced endlessly. I got tired just watching him.

The original plan had been to leave le parc des felins at around 5pm in order to ensure that we made it back to Calais on time to catch our train. Based on how long we spent in the park yesterday, we decided to stay in the park til closing time and then rush back. If we missed the train that we were booked on to board, then we would simply get a later one. As luck would have it, we actually made it back in time to board our train!